The Canadian Rockies did not disappoint.  Blue turquoise lakes, heights, canyons, glaciers, mountains, forests, animals, creeks; it really has it all.  There is a reason why Banff and Jasper National Parks are on many must-see lists.  It’s gorgeous, easy-to-navigate and filled with wonder and amazement.

Before I get into what we did, I have to give a shout out to Hynes Eagle.  Prior to this trip, they sent me some of their packing cubes (the four piece value set) to try and I took them with me. 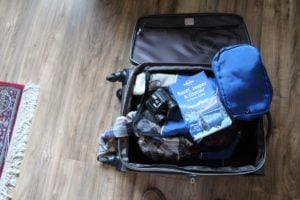 First off, the shoe bag was my favorite part.  I brought my dirty, muddy boots and I was concerned about packing them into my small carry-on with all my clean clothes.  This bag kept them in there, and has a little nozzle so they could breath. 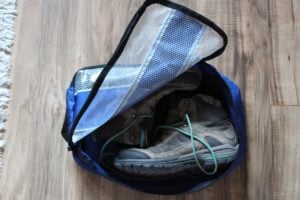 So happy with these cubes, and I will definitely be using them on my next adventure!

We came at the beginning of the season, so some of the trails were still covered in snow.  We attempted the Plain of Six Glaciers, but didn’t get very far due to an avalanche.  However, the entire area smelled like Christmas and it was the greatest thing I’ve ever smelled.  A lot of people stop at the front part of Lake Louise, but seriously, the most beautiful parts we saw were at the back.  The colors were gorgeous, and the water was low enough, we could walk on the floor.  That was rather spectacular.

Moraine Lake was gorgeous.  Make sure to take the trail to to top where you have 360 degree views of the lake, forest and mountain.  This was one of my favorite views of the trip.  Unparalleled beauty.

Johnston Canyon Falls was extremely busy.  The trail is shorter (and paved) so basically everyone comes to it.  It’s beautiful, but there were a lot of manmade structures around (paved roads and hand rails) so it kind of obstructed the views for me.  You also have to fight through crowds of people to see anything, so it kind of stole something from the experience.

One restaurant we ate at was one of the best any of us had been to: Three Ravens Restaurant and Wine Bar.  The food was delicious, the views were amazing and the drinks were great.  I would highly recommend for what we called “fancy dinner.”

After we booked our flights, many of the places to stay within Banff were already filled up.  We had planned on staying at the Fairmont, but it was sold out, but I’m seriously so glad it was.  I wrote a review of the place we did stay (and included images) on TripAdvisor.  Check out my review for Baker Creek Mountain Resort, which was the BEST!  The Fairmont was overrun with tourists and when we showed up, I breathed a sigh of relief that we didn’t have to spend so much money to be dealing with bus loads of tourists.

Since our place had a kitchen, we were able to make breakfasts and lunches, which turns out is way better because everything is so expensive.  They do have a grocery store in Lake Louise, but we ended up stopping in a place called Canmore for dinner on our way to Banff, and they had large grocery stores with reasonable prices.   We spent over 100 CAD each time we ate dinner for two people, and that is normal pricing in this area.  It is not a cheap place to eat, so if you can find a place where you can do lunches and breakfasts, you will save a ton of money.

We chose stops along the way to Jasper, and then saved some for the drive back to Banff.  Since you take the same 3-hour route, we decided to split it up so we didn’t try to jam everything all in one day.

Mistaya Canyon was so amazing we stopped on the way there and back.  All of us were mesmerized by this, and the weird thing is, none of us had even heard of it ahead of time.  We just saw it on the map and thought we’d chance stopping and seeing, and were amazed.  There are more popular ones, but this was incredible.

Seeing Peyto Lake was also a highlight.  The lake had just thawed and blue was so stark and beautiful.  We ended up doing a little hike and the path was covered in snow.  Deep snow.  Snow so deep, we all fell in.  It was hilarious, but we definitely needed snow boots for this part, and of course, we were wearing regular hiking shoes.

Athabasca Falls were incredible.  There were the most magnificent falls any of us had seen.  They were huge, and beautiful and awe-inspiring.

We stopped at the Colombia Icefield to see Athabasca Glacier.  I really enjoyed see the snow fall down onto the ice.   It’s roped off so unless you have a guide, you can’t walk on it, but we just stopped to take a peek!

Pack a lunch!  We did on the drive there and that was perfect.  The drive back we thought we’d find lunch, and never did.  Lots of restaurants were closed, the one large rest area had some very unappealing soups and sandwiches for the cost of a small fortune.  I was so hungry, I had to get something.  Some cheese, crackers and a bag of chips set us back $20.  So make sure to pack a lunch!

There are bathrooms all along the routes (and by bathrooms I mean outhouses, but somewhere to pee at least.)

We did the Jasper SkyTram, which was incredible.  We did most of the hike to the summit, but decided since there was so much snow and we felt we’d seen some amazing views, we didn’t finish.  We had lunch at the top of the it, and it was decent prices and pretty good.

We visited the beautiful Edith Lake for a little sun and water, and then decided to watch our friend fulfill one of his dreams: to cliff jump.  This ended up being one of our favorite memories.  We went to Horseshoe Lake and watched him do a back flip.   We all decided to jump in the water (not off the cliffs) but still in the freshly-thawed lake.  It’s so deep and clear you can see the deep, green abyss and your heart stops as you plunge into the freezing water.  It was an amazing experience!

Jasper was cheaper than Banff, and the restaurants were a lot more reasonable.  We ate at Gus’ Pizza Place, which was family-run and really good service and good food.  We stayed at the Overlander Mountain Lodge, which was incredible.  Their main lodge had a bar and restaurant, and the bar overlooks the mountains and inside they have a fire going.  It was beautiful.

If you’re planning a trip to see the Canadian Rockies, you could do worse than these two parks.  Like I said, they’re easy to navigate and beautiful.  You’ll definitely make life-long memories!

A lover of new experiences and fun road trips, Nina enjoys local and worldwide travel. She seeks authentic adventures ranging from wilderness camping to fine dining. Her passion is to share her experiences with others, so they can get the most out of their travels. Nina manages a local history museum in Columbus, Ohio, where she lives with her husband. Her travel motto comes from a woman she met locally who told her, "Always have a trip planned."

If you’re looking for somewhere to view fall foliage, you could do worse than Ohiopyle.  Ohiopyle State Park is within the Laurel Highlands of Western Pennsylvania.  I’ve been to this area before, and wrote about it here.  This time, we did some different things!  This would be a great over-night trip, or a very ambitious…

A good guidebook can be the difference between an extremely frustrating trip, and a very simple one.  I’ve had poor guidebooks that have left me tons of unanswered questions, terrible maps, inaccurate pricing information and wrong train timetables. Looking for a good guidebook with the information you need can be a challenge.  Sometimes it involves getting five…

It’s been a very hectic summer for me.  Finishing grad school, lots of traveling and other life changes.  But with the passing of Labor Day, we know the summer has come to an end.  (Some people don’t know the summer is over, I’m talking to you man at the gas station wearing white sweatpants on…

There is a reason that the area around Moab, Utah has been used as a backdrop for dozens of movies.  If you squint good enough, you can actually see Clint Eastwood and John Wayne hanging out there.  (At least it looked like them.  I mean, I was squinting… so hard to say what I saw.)…